The Morrocoy turtle, Molokonoutayaa, is a species of turtle found in Colombia. Culturally, it is an important animal for the Wayúu people. The earliest archeological remains indicate that turtles were used for religious, commercial and nutritional purposes, thus the Morrocoy is represented by its own Kanasü.

Kanasü or patterns, represent important cultural elements for the Wayúu, their traditions and their environment. Animals, nature, objects and concepts are depicted through the patterns.

Lili Epiayú, gives us her own personal interpretation of this traditional Kanasü. A more geometric and vertical figure than the one traditionally depicted.

Colors don’t have specific meanings for the Wayúu. However, as the bag is meant to capture a piece of the artist’s life, colors are associated with the state of mind. Bright colors are often used when the artist is feeling happy or satisfied.

The Plato or bottom, is different for every bag and Wayúu artists are known for not repeating platos. They represent dear aspects of the artist’s life, such as their family, emotions or dreams. 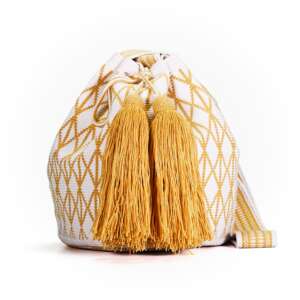 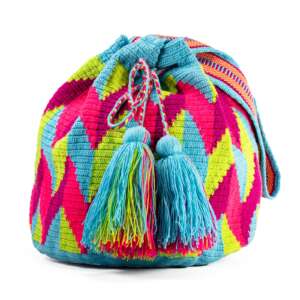